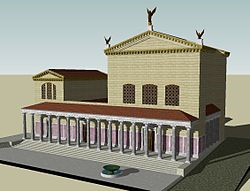 All official business is decided at the Senate House, where the elected representatives from the legion come together to vote on important matters. The senate is a civillian body, but officers of the legion often hold important senate positions as well. Normally, two consuls run the senate and each consul has the ability to veto power over the other. Does this ever lead to a fight? Only a lot!

Retrieved from "https://thecampjupiterroleplay.fandom.com/wiki/Senate_House?oldid=25331"
Community content is available under CC-BY-SA unless otherwise noted.