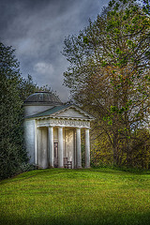 The Roman goddess of war, because you could never have enough war gods, right? Bellona oversaw the foreign policy of the Roman Empire, especially when it came to smashing their enemies. Her temple has a special field of dirt that represents foreign soil. When war is declared, the Romans symbolically throw a spear into the dirt. That may not sound very scary, but wait until the legion shows up at your doorstep.

Retrieved from "https://thecampjupiterroleplay.fandom.com/wiki/Temple_of_Bellona?oldid=26866"
Community content is available under CC-BY-SA unless otherwise noted.